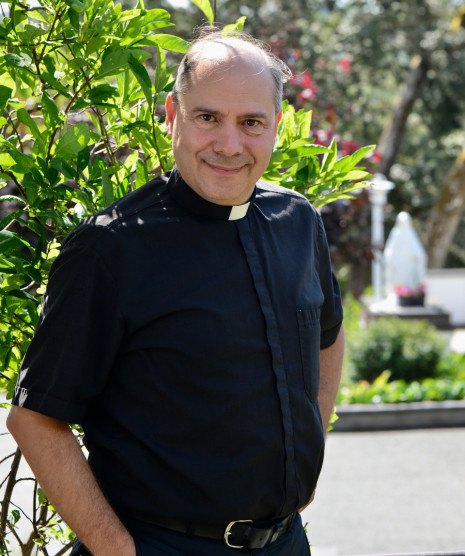 This teaching of Jesus grounds the pastor of two parishes, St. Joseph the Worker and Sacred Heart in Saanich, in his Catholic faith and his mission.   Truth, he says, is an experience of life . . . to be attentive to the reality of His presence.

Alfredo Monacelli was born to Franco and Malvina Monacelli in 1967 in Varese, a northern Italian city, near Milan.

In his youth, he had an attraction to the image of priesthood.  However, he thought priesthood was impossible for him because he did not consider himself to be an academic and had other fears about it, such as celibacy.

In 1990, after his military service in Italy, Alfredo immigrated to Vancouver, with his parents and brother Stefano.  They left behind his older brother, Pierluigi.

Three years later they moved to Victoria, where Alfredo managed a restaurant.  Here, while attending St. Andrew’s Cathedral, he had a reawakening and his fears about the priesthood dissipated.  He felt confident he could do it.  He believes that his mother’s prayers helped him.

In 2002, three years after his mother passed away in 1999, he entered St. Joseph’s seminary in Edmonton, under Bishop Raymond Roussin’s guidance and direction.  He felt his mother supported him through his studies from above and gave him the grace to graduate from Newman Theological College.

In 2006, Alfredo went to Campbell River to complete his formation with a year of internship under Fr. Bill MacDonald.  Two years later, on January 28, 2008, Bishop Richard Gagnon ordained Fr. Alfredo Monacelli and then assigned him as assistant pastor at Holy Family/Notre Dame in Port Alberni to serve the Ahousat First Nation, off Tofino’s coast.  This experience powerfully enriched his experience of priestly life.

After a year and half, he went to serve in Port McNeill, Port Hardy, Port Alice and Alert Bay in northern Vancouver Island, and, in 2010 was appointed pastor of St Edward Parish and Queen of Angels School, in Duncan.  Here he also had the joy of serving the Franciscan Poor Clare Sisters at the St. Clare Monastery.

In November 2014, his father, Franco, joined Malvina, in everlasting life.  Their heavenly presence, Fr. Alfredo says, is a grace to him.  The next year, Bishop Gary Gordon appointed him as pastor of St. Joseph the Worker Parish and St. Joseph’s School, and, on July 15, 2019, he received the additional responsibility as Pastor of Sacred Heart Parish.

As pastor of two parishes, one of Fr. Alfredo’s key goals, besides helping parishioners to keep growing in faith by deepening their love for Christ on a personal level, is to focus on developing a single, united children and youth group through “friendship as the experience of an encounter.”

He hopes to extend catechesis up to grade six and to have days of retreat for them during Easter and Advent.

11 a.m. and 6 p.m. at St. Joseph the Worker.  The distance between the two is just 3.2 kilometers, or a five-minute drive.  He will split his time with celebrating weekday Masses and working in the parish offices on Tuesdays and Thursdays at Sacred Heart and Wednesdays and Fridays at St. Joseph the Worker.  The two options for baptism at both parishes, at the community Mass or a private ceremony, will remain unchanged. And he is confident that primarily, the administrative staff and parishioners will be steadfast in lay ministries to help grow the faith and deepen their love for Christ.

Mass Schedule
All Services
Our Parish